Minutes from the October 2017 Parish Meeting

Minutes from the October 2017  Parish Meeting.

2. Minutes of last meeting held on 24th October 2016 were read out and adopted
as a true and correct record.

3. There were no matters arising from the minutes.

4. Financial Position. Val informed the meeting that the bank balance as at 15 th
October 2017 was £2123.69 however planned expenditure this year will reduce
the balance to approximately £1000. Val was concerned that the expenditure
this year (even though some items were one off) resulted in the village funds
being lower this year than in previous years. A copy of the financial position is
attached.

5. Precept for 2018-19. There has been no increase in the precept since 2010. With
a view to building up a reserve, Val suggested that the precept for 2018-19 be
increased. Following a thorough discussion, an increase of £450 was put forward.
Proposed by Neil Readman, seconded by Margaret Wilkinson.

7. Village Taskforce Walkabout – Update. Thank you to Steve Ridsdale for
accompanying the Council Team in July when repairs relating to footpaths,
signage and potholes were reported. Following numerous requests for repairs to
the severe dip on the road heading towards Hayton, the Highways department
have agreed to ‘monitoring’. Richard Coe mentioned that the gulley outside
Stoneleigh needed attention. A ‘works order’ for this had been issued in
September so Gabrielle agreed to chase this up with the Taskforce team.

8. Bielby Festival 2017. Ian Simpson had supplied a breakdown of costs (copy
attached) which Paul read out, noting the contribution of £460 from village
funds. The Festival was enjoyed and well supported by about 200 people,
enabling a donation to Marie Curie of £635.80. Paul thanked Ian and Richard for
organizing the event. Various suggestions were made as to how the Festival
could be developed including seeking sponsorship, expanding local advertising,
use of social media. Ian asked if future events could be supported by village
funds especially as costs are rising and he emphasized that the Festival is a
charitable event. The Meeting agreed that this was a good event for the village
and Val said that the village should give financial support to the event. Proposed
by Neil Readman, seconded by Ian Ross.

9. Bielby beck &amp; bridge update. Neil Readman was thanked for making the
necessary arrangements to fix the broken bridge on Mill Lane. He added that the
beck was flowing well because of the continued maintenance. Margaret
Wilkinson had recently contacted the Environment Agency due a foul smell near
the bridge. Paul Ward agreed to follow this up.

10. Defibrillator. Paul checked the phone box regularly to ensure that the cabinet
was working. Gabrielle suggested the purchase of some signs for the phone box
and bus stop shelter. Proposed by Richard Coe, seconded by Graham Tew.

Also see below the Financial Position as at October 2017 ( can also click on the link to see the financial position if it's not clear enough in the post) and see below a breakdown of costs for the 2017 Bielby Music Festival. 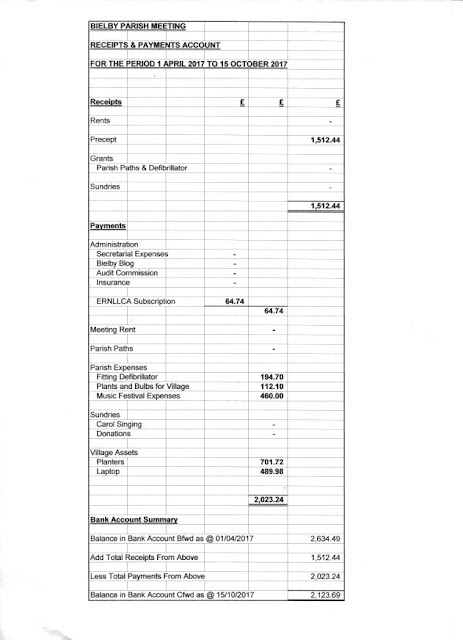 Look forward to seeing you there!

Get the latest news and information about what's going on in Bielby, East Riding Of Yorkshire, UK.